skip to main | skip to sidebar

The Sources of Value

It is one of the established 'facts' of finance that value outperforms growth over reasonable time horizons (see Chapters 22-34 of Behavioural Investing). However, which of the component sources of return generate this performance?

In a new paper Fama and French explore the composition of returns for value and growth stocks. They start by decomposing returns into dividends and capital gains. The chart below shows the results they uncovered using US data since 1963 with value and growth defined by price to book/size quintile intersections. It is worth noting that Fama and French perform their analysis in nominal terms (so the capital gains they show include the effects of inflation - around 4.5% over the their sample period). The chart shows that importance of dividend returns to value investors. The dividend yield on big value stocks is 50% higher than that of the market, and twice that seen by growth investors. 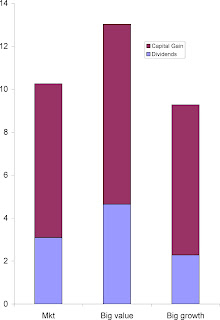 Fama and French then go onto to decompose the capital gain term into several sub-components. They show that the capital gain term can be broken down into an element due to growth in book value (effectively the investment carried out by the firm), and the change in the valuation ratio (price to book in this case).

The results of this further decomposition are shown in the chart below again for the period 1963-2006. The picture reveals show huge differences between value and growth stocks. Value stocks see hardly any growth in book value - not hugely surprising, they don't tend to invest large sums, in general they are more interested in cost cutting than investment. However, their is a very strong tendancy for convergence in price to book terms - that is to say their valuation rebound - although the decomposition is silent on whether this is the result of a bounce back in profitability or not. 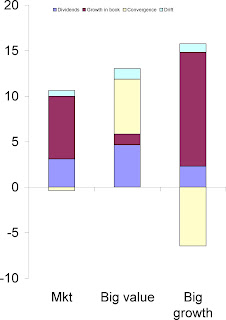 The same can not be said of growth stocks. They see an enormous amount of growth in book value - as they engage in large cap ex and M&A. However, they convergence is negative, they witness declines in price to book as their profitability erodes and valuations return to 'normal' levels.

From a behavioural standpoint this is exactly what we would expect to see, if investors over pay for growth. Of course, Fama and French prefer a rational explanation which I find far from convincing, but the bottom line is that the return decomposition can't help us distinguish between the rational and behavioural explanations - we have observational equivalence.

In Chapter 43 of Behavioural investing I show a decomposition of returns for the US market. I argue that returns can be decomposed into the dividend yield, growth in real dividends, the change in valuation and inflation. I usually do my analysis in real terms so I can dispense with the last term. I have recently completed a similar exercise in terms of value and growth stocks. The results can be seen below. 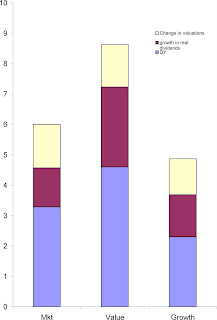 Investors of all kinds ignore dividends at their peril.
Posted by James at 01:21 268 comments:

Two chapters in Behavioural Investing suggest that investors focusing on sectors rather than stocks are barking up the wrong tree. Chapter 32 outlines the evidence showing that value and momentum effects are much greater at the stock (and even country level) than they are at the sector level. It also cautions that sectors are rarely stable entities in terms of their investment characteristics. Pretty much every sector has been 'vale' and 'growth' or it's lifespan. So ruling out sectors because they are growth or value is a big mistake.

Chapter 19 also touches on sectors. This presents some of the work of Cremers and Petajisto who show that those fund managers with low active share, but high tracking error (those taking sector bets) manage to destroy value for clients (having a negative gross and net alpha). Such managers account for around 35% of the US market! Whilst this isn't proof that sector rotation strategies are hopeless (that would be to confuse the absence of evidence with evidence of the absence), it does at least make one stop and think about the role of sectors.


A new paper sheds further light on the fruitlessness of trying to rotate sectors. The paper provides evidence of the absence! Stangl, Jacobsen and Visaltanachoti explore the possibility of timing sector rotation across the stages of the business cycle. They identify five stages of the cycle shown in the diagram below.

They follow a rotation strategy that seems to me to capture the conventional wisedom regarding sector rotation, as set out below.

They investigate the US market from 1948 to 2006. In a heroic leap of faith, they assume perfect foresight on the part of investors. That is to say, they assume that investors know with absolute certainty which phase of the business cycle they are in.

Even assuming such prescient powers, the sector rotation strategy only outperforms by around 2% p.a. If one were to include transaction costs, and drop the perfect foresight assumption then this would quickly become a zero, or even negative, alpha.

When one examines the detail of the sector rotation strategy, some further issues are created. For instance, those sectors favoured by the conventional wisdom in early and middle stages of expansion actually have negative alpha over those phases!

Stangl et al show that even if you can forecast the business cycle with complete accuracy (see my earlier post on why we don't need economists for my thoughts on this) then following the conventional wisdom with regard to sector selection is an suboptimal investment decision. You would be better off following a simple market timing model which stayed long equities apart from during the early recession period.

So sector rotation (at least as represented by the conventional wisdom viewpoint) is not a good source of outperformance. This certainly calls into question the raison d'ete of many strategists!
In fact, all of the evidence mentioned in this post raises challenges to the way in which investment is done. Not only is sector rotation highly dubious, the fact that useful investment characteristics such as value and momentum are better defined at the stock level rather than the industry level brings the role of sector specialists into doubt. I have long argued that what we need is a few analysts with good investment skills, rather an armies of industry 'experts'.
Posted by James at 04:24 29 comments:

Welcome to my blog. As those of you who know me can attest, I dislike the immense amount of noise that passes for analysis in the investment world. Hence I will only post to this blog, when I actually have something to say.

James
I have worked in the investment industry for the last 18 years or so. I specialize in the application of psychology to finance. I'm author of four books (including the Little Book of Behavioural Investing, and Value Investing).