skip to main | skip to sidebar

I wasn't going to post this week, as I have a couple of other things on. However, this paper arrived in my inbox and I couldn't resist the urge to flag it up to you. Professors Doran, Peterson and Wright survey the academic finance communities attitudes towards market efficiency and investing.

Nearly 60% of the professors accept that the US market is weak form efficient (i.e. ignoring the enormous literature on momentum as a stock selection tool, incidentally something I am guilty of as well).

One third of the them accept that the US market is semi-strong efficient (i.e. that value strategies don't work since they involve publically available information such as earnings or book value).

Only when it comes to strong form efficiency do we finally see the academics reject the concept on efficiency. Some 57% said it was possible to predict future returns when using private information. 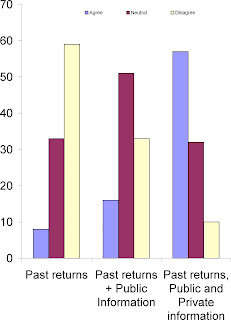 Two other questions of interest were raised in the survey. The first concerned whether the professors agreed that returns were a compensation for risk (i.e. the multi-factor world of Fama and French - a rejection of behavioural finance). Only a mere 27% of the professors disagreed with this statement. So we behaviouralists are definitely in a distinct minority in academic circles.

The other question concerned whether the professors thought that investment strategies that could consistently beat the market without taking above market risk actually existed. Only 17% of the respondents said yes such strategies existed. So academia seems to remain a bastion of market efficiency and passive investing. When asked, just 18% of the professors said their objective was to outperform the index.

Sounds like finance profs are just like the rest of us - human after all!
Posted by James at 02:31

Just a very brief note, I've been trying to get an email address for you without much success.

I run a website called MoneyScience at www.moneyscience.com. I've included this blog in the finance blogs section but I'd very much to like to syndicate the RSS headlines also.

Thanks for your time.

I would note that I interpret EMH as saying there is no systematic way of beating the market using prices, public or all information respectively.

It is entirely possible that someone beats the market using intuition or irreplicatable genius, since there is no way to arbitrage those abilities out.

You need us if you have any of these tax problems: Back
Taxes, Unfiled Returns, Missing Records, Threat of Levy, or, if you need an Installment Agreement or an Offer in Compromise A tax levy or garnishment or attachment are all the same thing. The terms may be used interchangeably. A wage garnishment or levy may be against any asset. In the enforcement of tax collections. We prepare all Federal and State Unfiled tax Returns The Fair Tax Act (HR
25/S 1025) is a bill in the United States Congress for changing Tax Solutions laws to replace the Internal Revenue Service (IRS) and all federal income taxes (including Alternative Minimum Tax), Past due tax returns, Past due tax returns, Past due returns, Past due taxes, Unpaid tax, Tax negotiation, Wage levy, Robert M. Adams, Bob Adams, Try to Be Happy, Search Engine Optimization

Thanks for sharing. It was very informative.
groupon clone| Angry birds clone|

Welcome to my blog. As those of you who know me can attest, I dislike the immense amount of noise that passes for analysis in the investment world. Hence I will only post to this blog, when I actually have something to say.

James
I have worked in the investment industry for the last 18 years or so. I specialize in the application of psychology to finance. I'm author of four books (including the Little Book of Behavioural Investing, and Value Investing).